This screen shot shows what i want to point at this time: 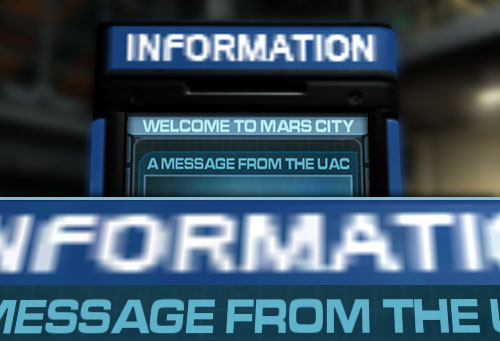 Older games often had to reduce the texture resolution to match the hardware limits. The quality of the “Information” label is what you would expect from older games but look at the lower part of the screen shot: This text is sharp like a razor blade!

I was always impressed by the sharpness of their UI on displays and monitors and thought that it was maybe done via real fonts and vector shapes.

Surprise! I was wrong. Long story short: The game doesn’t use one texture for the whole UI element. Instead there’s a script language like HTML (but more powerful!) where one panel consists of smaller elements. The content is stored in several textures. Most of the elements are  placed manually but the text-quads are created by the engine (you just enter some text).

…and of course, all this can be interactive which is another awesome feature of the Doom 3 GUI. You can actually “played” this turkey game by pointing & clicking at the monitor – it’s not just an animation!

Thanks for reading! Feel free to contact me and if you know a mod which deletes all monsters in Doom 3, i would love to “play” it and just enjoy the graphics. :)