When I saw that the smoke is shaded (depending of the angle you look at it) I was impressed but had no idea how it works:

Sorry for the stuttering, i had to capture it with CamStudio and rotate the Camera by hand. At first I thought maybe they move a gradient along the particle textures depending on the angle to the sun but later I learned that’s they modified the normals of the particle (see the updates below).

Update 1
Eric Chadwick mentioned that a similar effect was already used in Shadow of the Colossus. His post links to a PDF where you can find the smoke shading on page 16.

Source: Shadow of the Colossus

If you’re interested in more thoughts about the issue, feel free to read the comments on the polycount thread.

Update 2
It’s a honour for me to present you this link which was posted into the comments by a really nice guy (i guess a Relic-Dev, but he wrote it anynom) which talks about the Relic-Fx-System and the also show the smoke particle shading.

Update 3
Thanks to Denis we can read this incredible PDF about Brütal Legend with tons of effect explanations – for example the awesome smoke particle trick: 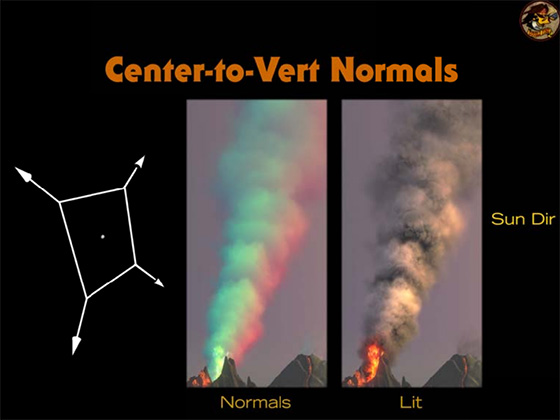